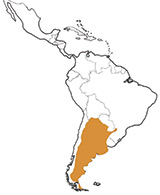 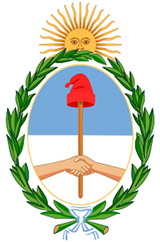 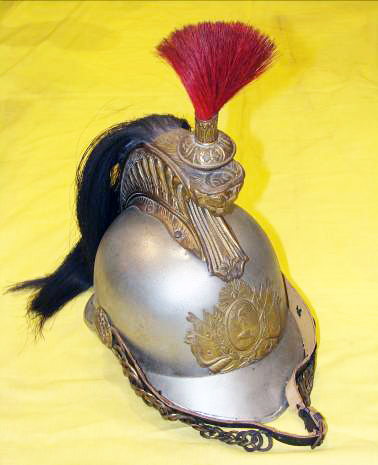 ARGENTINA
In 1810 the Cabildo of Buenos Aires deposed the local viceroy and ruled on behalf of the king of Spain until Argentine independence was adopted at the Congress of Tucumán in 1816. Until the end of the nineteenth century, only shakos and morions were worn by the Argentine military.
From 1900 to 1904, the Presidential Guard was issued cuirasses and helmets of the type worn by the French Garde Républicaine. In 1903, a white cork helmet, similar to the British Foreign Service Helmet, was also introduced for officers.
One year later, with the rise of German influence among the Argentine military leaders, the M95 style Pickelhaube was adopted by the Presidential Escort. Favorably received and beginning in 1910, the M95 became standard issue, through-out the Argentine armed forces. Initially, these helmets were imported from Germany, but when the First World War broke out, Buenos Aires was obliged to begin manufacturing (by the Arsenal de Guerra) its own M95 clones. Identified locally as the Model 1910, these helmets were used until 1924.
Between 1924 and 1935, only cork tropical helmets, decorated with a variety of emblems, were in use.
Facing what was perceived as threatening Chilean and Brazilian military aggressiveness, Argentina began an expansion and modernization of its military in the mid-1930s, starting with the adoption of the steel helmet.
After a long series of experiments (including the Austrian M16), the Swiss M18 was adopted. Retaining its original color, it was often decorated on the side with the national cockade.
As relations with its neighbors improved, the military introduced in 1938 the lightweight German M35 helmet under the name Casco de fieltro (felt helmet). The side cockade remained. Beginning in 1947, a new model of pith helmet was introduced. Manufactured locally, it was produced in different versions. Then in 1951 the army introduced the khaki-colored, lightweight, French M1 plastic helmet. Badly conceived, it was rapidly abandoned.
Having signed the Inter-American Treaty of Reciprocal Assistance (Rio Treaty) in 1947, the Argentine Army began receiving in 1951 significant quantities US equipment, particularly US M1 helmets. From the beginning M1 clones were manufactured locally, probably for budgetary reasons. Three types of liners are known to have been produced. The locally manufactured model known as the M2 enjoyed a long life in the Argentine armed forces. Different camouflage covers were worn on these helmets. The Air Force and Navy used the same helmets but with their own unit-specific colors and emblems.
In 1997 following an international tender, the Israeli model RBH-303 was introduced on a limited scale.
The paratroops used, rather early on, a locally made jump helmet known as the ETA M1944.
Tank crews had used different US headgear, until a locally created model, the Baisi Helmet was introduced around 1943. Produced in two versions, this helmet was used until the more modern, electronically equipped headgear was introduced in the 1970s. Models from various countries (particularly France) have been used since that date.
Beginning in the 1970s, military police units used their own locally made, synthetic composite helmets.
For a number of years now a PAGST-type helmet, known as the CABAL II has been studied by the armed forces. But the adoption of this modern helmet has been postponed.