The terms below are words and phrases found in the novel which may not be familiar to the reader.  The definitions relate to their usage in the text and are not comprehensive. They are common to the U. S. Army and may be different in other branches of the military.

air operations – military activity involving aircraft: most commonly the use of helicopters and fixed-wing aircraft for the tactical support of infantry units in combat or for transportation and logistical support

ao dai – the woman’s traditional Vietnamese tunic-type dress, split up the outside of either leg, usually worn over black trousers, and normally made of white silk

artillery – large caliber weapons that operate by projecting explosives far beyond the range of personal weapons. The branch of the army that customarily operates these weapons

base, base perimeter – a permanent or semi-permanent area used for tactical operations, such as positioning an artillery battery, as a supply depot, or a rear echelon administrative center.  The perimeter refers to the man-made defensive position built of a connecting series of protective bunkers and barbed wire fencing.

battery – a tactical unit of artillery consisting of at least 100 officers and men, howitzers, and supporting vehicles and equipment

bayonet – a knife-like weapon designed to fit onto the end of a rifle barrel, effectively turning the rifle into a spear for use in close-quarter combat

B-40 – a variant of the Russian-made, shoulder-held, rocket-propelled grenade launcher used by the Viet Cong and North Vietnamese (see RPG) 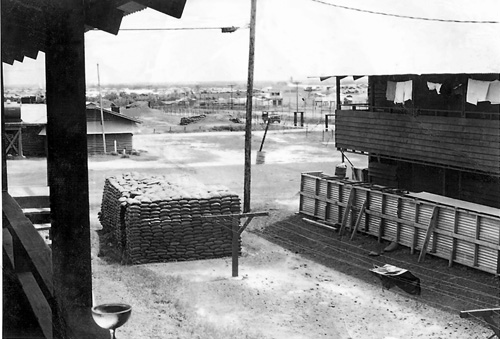 body bag – a non-porous bag designed to contain a human body, used for the storage and transportation of corpses

boom-boom, boom-boom fever – slang term for sex or the preoccupation with sex

chopper, chopper pad – slang for helicopter. The landing platform for a helicopter or its associated facilities

colonel (bird, full, lieutenant) – colonel (full or bird) is a senior officer rank just below the rank of brigadier general.  Lieutenant colonel is one grade below colonel.

combat ribbons –  military decorations in the form of ribbons worn on the uniform to recognize service and personal accomplishments while serving in combat as a member of the U.S. Armed Forces

Delta – the delta region of the Mekong River south of Saigon

DEROS – Date Eligible for Return from Overseas. The date when a soldier was to leave Vietnam to return home

Donut Dolly – affectionate term for a volunteer Red Cross girl, who visited military personnel in the field to boost morale and served as a liaison with a soldier’s family in case of emergency. The name originated in World War I in France with Salvation Army volunteers, known as Donut Girls. In World War II it became Donut Dolly.

fire for effect – an artillery command directing concentrated fire once a target has been zeroed in upon, and usually includes the firing of all howitzers in the battery

fire mission – a tactical military operation involving the receipt of target information, the computation of a firing solution, the commands to the artillery weapons, and the firing of those weapons

fire support base, fire base (FSB) – a military encampment, typically including a single battery, designed to provide artillery support to infantry operating in areas beyond the range of personal weapons

FNG (Fucking New Guy) – a derogatory term, used within the military in Vietnam, directed specifically at replacement personnel who have recently joined a pre-existing unit

GI – familiar term describing members of the U.S. Armed Forces or items of their equipment – derived from “Government Issue”

gunnery technique – the procedures associated with the identification of targets, the computation of firing solutions, the commands to the howitzers, and the firing and maintenance of those weapons

hooch, hooch maid – a simple dwelling. Any kind of housing unit used to house military personnel. They were often cleaned by local Vietnamese women or maids.

Huey – the nickname for the Bell UH-1 Iroquois helicopter used as a gunship and to transport troops into combat.  The original designation of HU-1 led to its nickname.

Back to Top
incoming – enemy mortar, rocket, or artillery fire that could often be heard as a whistling sound as the projectile passed nearby overhead (see outgoing)

Back to Top
khakis – the “dust-colored” summer uniform, which was worn in lieu of combat fatigues when traveling to and from Vietnam and for formal occasions

Long Binh Post – a major U.S. Army headquarters and logistics depot near the city of Bien Hoa and adjacent to the II Field Force compound

Back to Top
mama-san – an older Vietnamese woman

MEDEVAC – medical evacuation. The timely and efficient movement of wounded personnel from the battlefield, usually by a specially equipped helicopter

Military Assistance Command Vietnam (MACV) – the U.S. unified command structure for all military forces in South Vietnam during the war, located at the Tan Son Nhut Air Base on the outskirts of Saigon

NCO – a non-commissioned officer. An enlisted member of the military with a degree of authority, who has usually been promoted from within the non-officer ranks

Back to Top
officer (commissioned, duty, junior, senior, warrant) – a member of the armed forces who holds a position of authority. A commissioned officer is formally granted this authority by a sovereign or political leader. A junior officer has the rank of lieutenant or captain. A senior officer holds the rank of major, colonel, and general. A warrant officer is a highly skilled specialist, ranking above enlisted personal but with limited command authority, such a helicopter pilot.

Officers’ Club (O-club) – a facility found on most military bases, reserved for officers, which serves as a center for dining and socializing

olive-drab – a color, a dark olive green, which is the standard color used by the U.S. Army for uniforms and equipment

off-limits – restricted entry to a physical area or facility

OSS – Office of Strategic Services, the pre-cursor of the Central Intelligence Agency, created in WWII to collect and analyze strategic information and to conduct special operations in support of the war effort

Paris Peace Talks – negotiations in Paris to find a peace agreement from 1969 to 1973.  A peace treaty was finally signed on January 27, 1973, which intended to establish peace in Vietnam and end the war.  It ended direct U.S. military involvement and temporarily stopped the fighting between North and South.

Paris Revolution 1968 (“May ’68”) – a general strike of students and workers which brought the French  economy to a standstill and lasted about a month. It was a social revolt against modern consumer and technological society as well.

pedicab – a man-powered vehicle with three wheels and a double seat in the front used to transport people, usually in an urban environment

platoon – a military unit usually consisting of two to four sections or squads and containing 16 to 50 soldiers.

PX – short for Post Exchange, a shopping facility open only to the military and usually located on or near a military installation

Back to Top
Quonset hut – a lightweight prefabricated structure of corrugated galvanized steel with a semicircular cross section. From Quonset Point, a location in Rhode Island where the structures were first manufactured 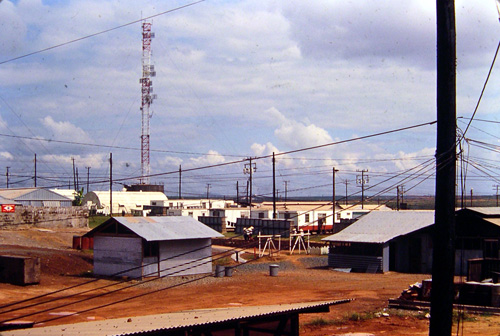 R & R – short for rest and recuperation. A term used to describe the free time usually awarded a soldier who had been in Vietnam for at least six months. It involved a government-paid, one-week holiday in one of several countries outside of Vietnam, Thailand, for example.

REMF – short for Rear Echelon Mother Fucker. A derogatory term to describe those officers and enlisted men who performed logistical and administrative duties but were not involved in combat operations

revetment – a barricade of earth, sandbags, or other material set up to provide protection from enemy fire, particularly shell fragments from exploding projectiles

ROTC – Reserve Officers’ Training Corps. A program sponsored by the military and found at U.S. colleges and universities which provides training for students during a four-year period who seek to enter the military as officers. In addition to his academic diploma the student is awarded a commission and the rank of 2nd lieutenant or the equivalent at graduation.

Back to Top
salvo – a single firing of weapons in unison, particularly artillery weapons 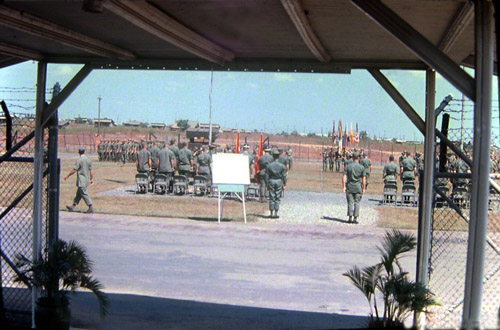 shell, shell casing – the projectile, as in artillery shell, or that part of the cartridge (the casing, usually of brass) that contains the explosive powder to which the projectile is attached

Signal Corps – a branch of the army responsible for military communications: radio, telephone, and digital

Tan Son Nhut Air Base (Airport) – a civilian and military air transport facility located on the outskirts of Saigon, which served the South Vietnamese and American air forces during the war

tour of duty – a fixed period of time military personnel were assigned to a particular posting. In the U.S. Army in Vietnam the tour of duty was normally 12 months.

trishaw – term for pedicab in Burma

Back to Top
UVA – University of Virginia

Viet Cong – the shortened name for the National Front for the Liberation of South Vietnam (NLF), a political organization and army in South Vietnam that fought the United States and South Vietnamese government forces during the period 1955 to 1975

Viet Minh – the shortened Vietnamese expression for “League for the Independence of Vietnam,” a national independence movement founded in South China in 1941, which opposed French colonial occupation, Japanese occupation during WWII, and later the American presence in South Vietnam

Zippo – a brand of cigarette lighter, often engraved, popular with soldiers in Vietnam